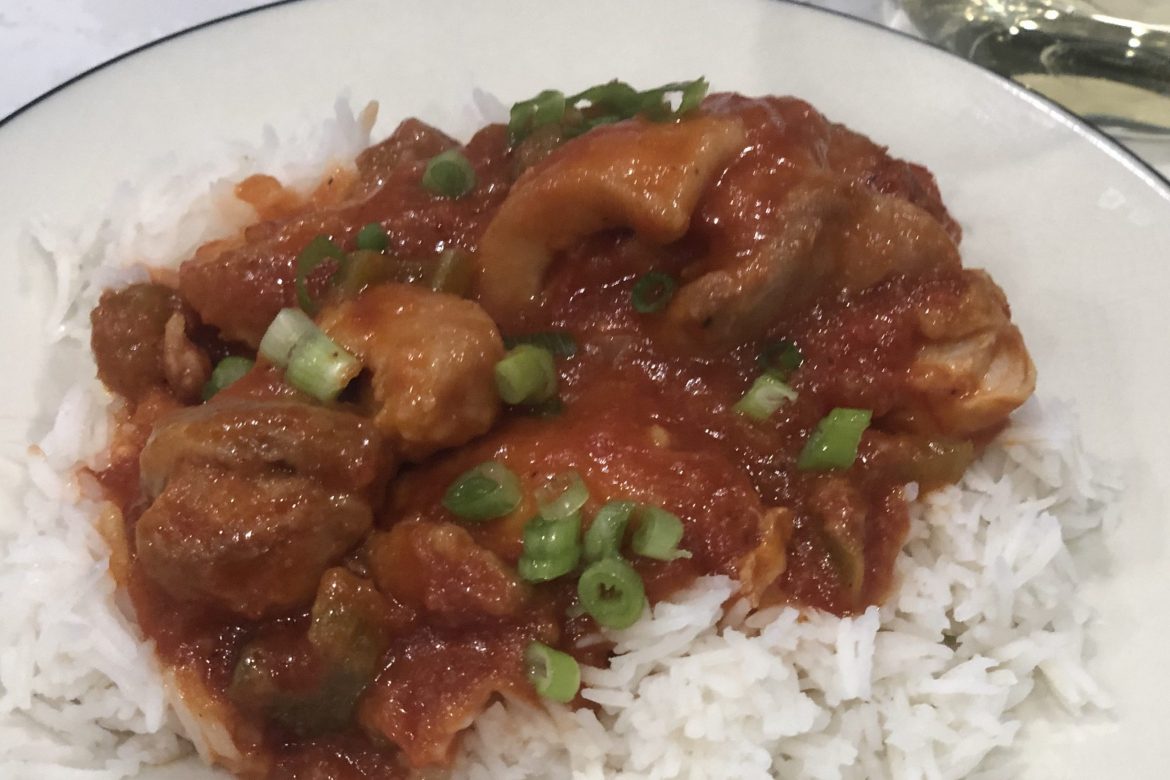 A couple nights ago after we finally got the kids to bed, my husband and I had a couple drinks while watching an episode of Cooks Country we had on DVR. One dish in particular looked really good and we wanted to give it a try. The next day I searched but couldn’t find the recipe – I don’t have the Cook’s Country subscription and also couldn’t remember the actual name of the dish. So I decided to pull together the ingredients I could remember and that we had on hand and added them in quantities according to our tastes (not TOO much onion or garlic, plenty of salt, not too spicy because of the kids…). I was a bit skeptical but took pictures and made notes so I could post the recipe……if it all worked out.  Luck was on our side – dinner was delicious, the kids gave this rave reviews and Addy finally ate her first bites of non-pureed (yummy!) meat.

Note: I knew this was a chicken dish from Louisiana and they used a special “Louisiana seasoning”.  During the show they never told us what was in the seasoning, only that the recipe for it is available on their website. So I just seasoned this based on how I imagined they would season it in Louisiana….

2.  Remove any fat from chicken thighs and cut each thigh into 4-6 pieces;  put into large bowl.

4. Heat 1/4 cup oil in cast iron pan over medium-high heat. When oil is hot, cook chicken thigh pieces for about 3 minutes on each side (until golden brown).  (It’s okay if they are not fully cooked because they will finish cooking in the oven.) Remove from pan and set aside.

5. Coat the bottom of the cast iron pan with a thin layer of oil. Add the celery, onion and garlic and remaining flour mixture and cook for 1 minute.

6. Add the chicken broth and wine, bring to a boil and let cook down for about 2-3 minutes.

7. Add the crushed tomatoes, bacon, Worcestershire sauce and bay leaf. Season with salt and pepper as desired and mix well. Cover the pot and transfer to oven. Cook for 35 to 40 minutes. (After a little more research on this dish, traditionally some Tabasco sauce is also added at this point.)

8. While the chicken is cooking in the oven, start to cooking the rice.

Serve chicken over rice and enjoy!!

** Because it was a rainy, quarantined day, we also ate this with some bread on the side – the sauce was perfect for dipping!!!

****MOST IMPORTANTLY – Addy won’t eat meat, EVER! I gave her a bite of this and she didn’t spit it out!! Not kidding, first time ever!!! (Although such a serious face, notice she raises her hand when asked if she wants more!) Here’s proof!

And the boys asked if they could also give their dinner reviews….