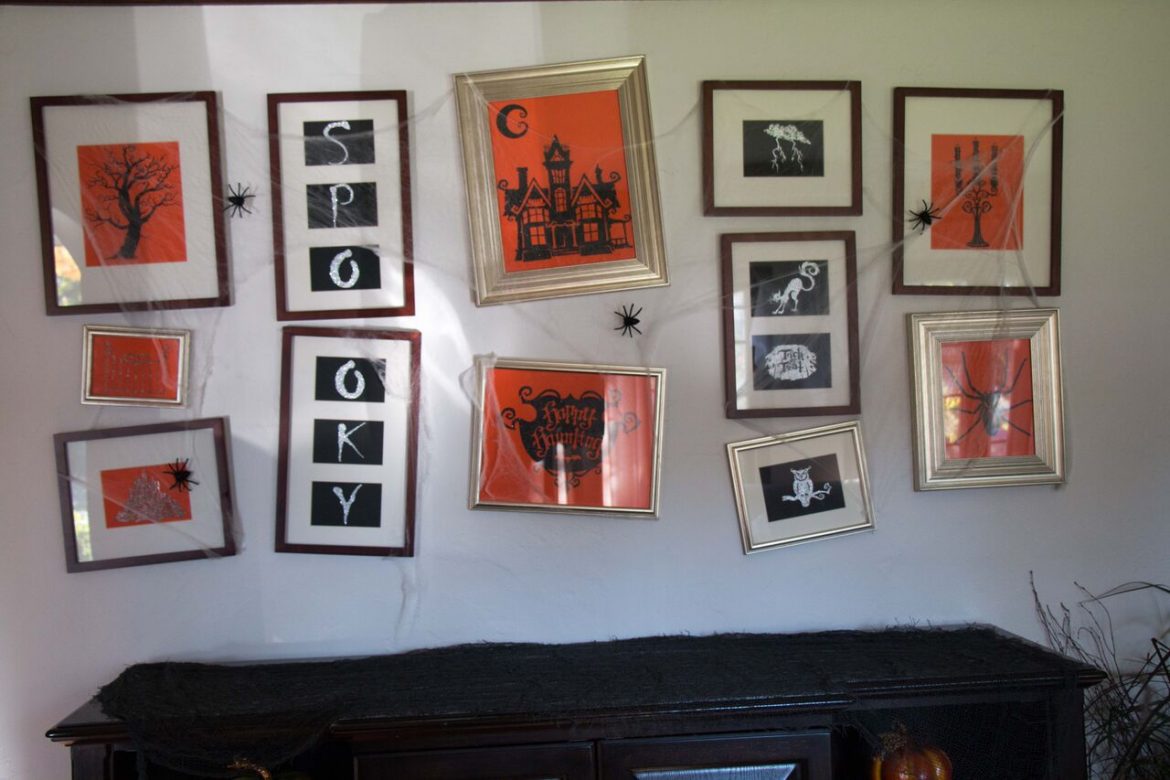 The kids are finally off their sugar-highs, decorations are mostly away and we have fully recovered (I think…) from the craziness of hosting over 60 people at this year’s Halloween Bash! Now I can sit down and write about it 🙂

This year instead of sending an evite, I crafted invitations to mail out to our guests. You can read more about those here. I’m already designing next year’s invitation and have some ideas that make these look kind of boring!

My husband and I started decorating for Halloween several weeks in advance. We wanted the scene to be a little more dramatic than it was last year but also something that the youngest kids (1-2 years old) could deal with. My two favorite projects this year were transforming all of our picture frames from family photos to Halloween scenes and making themed wine glasses. For the picture frames, I cut out the different Halloween images using my Cricut machine, glued them onto orange and black cardstock and inserted them into the frames over our family photos.

I finished the main wall by moving the pictures off-center and covering them with cobwebs and spiders. This project took a LOT of time but I’m saving them for next year!

Our engagement photo was professionally framed and matted so it was pretty much impossible to put another picture in the frame. Instead I made creepy vinyl cutouts and stuck those onto the glass.

Onto the next project… Wine never tastes as good to me in a plastic cup as it does in an actual glass, so this year I decided to ditch the plastic and use glass. Obviously a regular, plain wine glass wouldn’t be festive enough for this party so I had to dress them up a bit. Originally each glass was going to have the same design until I realized everyone would get their glasses mixed up whenever they set it down. This would get seriously annoying and I decided to create a different design for each glass….

The entryway was simple and easy to do but also set the mood when guests entered. I used a pop up coffin (I found this one at Michael’s and stuck two arms out of it) to block the stairway and keep kids from going up. Then I draped cobwebs over the railing and used an LED tea light on each step.

The cupcakes are my go-to chocolate pudding cupcakes with vanilla buttercream frosting. (I’ll eventually be posting that recipe!!) These were decorated with Halloween sprinkles and chocolates that I made using skeleton molds.

This is my favorite New York Style cheesecake (another recipe I’ll get around to posting…) Apparently the kids got to the hand decoration before I did because and when I finally found it, half its thumb was missing. The red cookie frosting was unused from a previous birthday party and turned out to be the quickest fix I could find.

My husband is always in charge of decorating outside. He had some pretty fun ideas this year, and making them work was WAY beyond anything I could help with!! My favorite was this box he built (shown below), and as guests walked by it the lid opened slightly and it started shaking. This scared the crap out of quite a few people!!!! Once guests (and trick-or-treaters) made their way past the box and under the cobwebs hanging over the porch, they were greeted by two skeletons – one of which even spoke to them!

With all the craziness, we never managed to get a family picture in our Star Wars costumes 🙁 At least a friend grabbed this one for us….