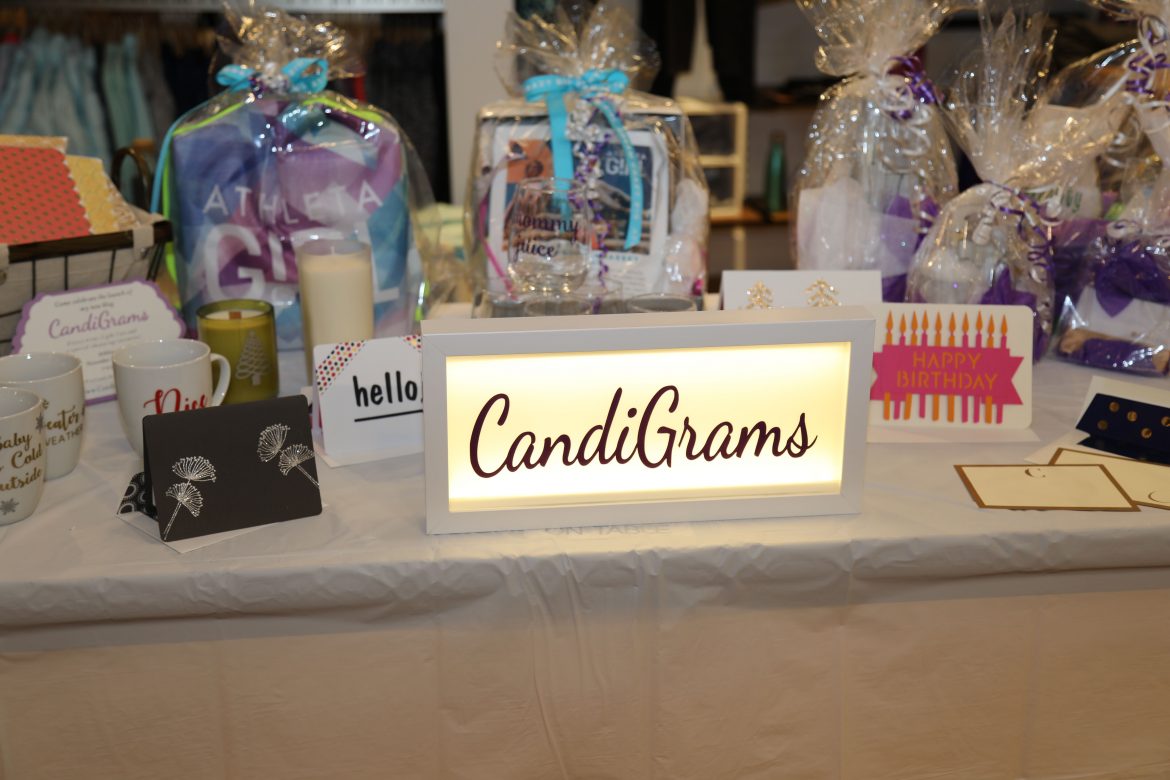 What an amazing day yesterday turned out to be! I’ve been trying to make time to sit down and write this since I got home last night, but I guess with three kids things don’t really go as planned!

It was a huge day for me – the launch party for CandiGrams! Not something I ever dreamed could happen, but it just goes to show that when you really want something there’s usually a way to make it happen.

This all started back in mid-October when one of my friends suggested doing a launch party. I’m always down for a party, so it sounded like a great idea to me. My husband immediately assumed this meant a lot of people partying it up in our house while he tried to keep the kids sleeping upstairs, so it was time to get creative. I was talking this through with another friend and she suggested doing it at a store that I love. Athleta was the obvious first choice being that I’m there at least once a week. The very next day I happened to be there making a purchase and decided why not at least ask. The worst that could happen was they tell me they don’t do things like that. It all worked out because here I am a month and a half later writing about what an amazing event the launch party turned out to be! Actually, the entire day was almost perfect (will get to that “almost” later).

The morning was crazy as always, getting the kids breakfast and out the door to school. They sensed something was going on and of course were more difficult than usual (screaming and not letting me go at drop off, etc.), but they all got where they had to be AND on time. My next stop after dropping them off at school was Athleta. They let me set up a table in the store to promote my blog and products! It was a great experience being in the store for a few hours and having the opportunity to meet and talk to people I otherwise would have never had the chance to. (I also enjoyed trying on some of the clothes I don’t get a chance to when I have the boys with me!)

After a few hours at the store, I had to get home to frost the cupcakes and start getting ready for the evening. (Confession, I did order a margherita pizza from Cipollini because it was right there, and why not celebrate a little early?)

In the middle of decorating the cupcakes my doorbell rang. What a huge surprise to see a flower delivery! (Thank you so much to my sister-in-law and her family!!) Totally made my day – sometimes it’s the little things that mean so much 🙂

By the time I finished frosting and decorating 48 cupcakes it was time to get my oldest guy off the bus. Then straight to the salon for a blowout. This was a big treat – I don’t get blowouts, EVER – and I was SO excited!!! Then 30 minutes later walking out of the salon my son looks at me and says “Mom, what did they DO to your hair? Why does it look like that?” It was so bad, even my almost-six-year-old knew I could not go anywhere looking like that! (That was the “almost” part of the perfect day…) So now I’m down to an hour and a half until I have to be at Athleta, and in addition to putting the cheese & cracker and vegetable trays together, blowing up balloons and loading the car, I now have to shower because that was the only possible way to fix the disaster that was my hair. And then I get the call from my husband that he is running almost an hour late because of an accident causing worse-than-usual traffic. Fortunately my in-laws took my two youngest guys for the afternoon so I was able to squeeze in my quickest shower ever and manage to get ready in time! Even better – I had probably the best hair day that I’ve had in the past year (not saying much, but I’ll take it!).

The next several hours are mostly a blur. The hour I spent unloading the car and setting up felt like 15 minutes. I was able to grab all my favorite pieces and display them on a rack – it felt way cooler than it probably was, haha. My mom and sister-in-law and my husband’s family were there before I realized it was even approaching 7pm. The store looked great and I felt more relaxed after seeing my family there!

It wouldn’t be one of my parties without the wine table!!

There were already so many surprises throughout the day, and then right before the event started and when my sister-in-law arrived, she gave me this adorable and thoughtful gift from her, my brother and their kids!! How cute is this?? Right now, too cute to write on and use up 🙂

Let’s get the party started!

At 7:10 I was extremely anxious because it was still just family at the store. Were people really going to show up? Lots of kids are sick, is anyone coming out on a Monday evening,… Then within the next 10 minutes the place was filling up. The vibe was awesome – everyone was hanging out, having a drink, shopping, trying on clothes and just seemed to be enjoying themselves! There were two or three times during the night that I stepped back to take in the scene of the entire store. It was surreal to have all my friends and family in my favorite store – open just to us – having a great time together. It amazes me how supportive everyone is and it’s absolutely the greatest feeling!!!

The staff at Athleta were amazing, they didn’t stop all night! The fitting rooms were crazy for about 2 hours straight! The 20% discount was an added bonus 🙂 As were the 2 Athleta Girl raffle baskets they donated!!

Just about all 50 guests spent most of the evening with me at the store! As everyone was wrapping up their purchases my mom walked around handing out the favors and we called the winners of the raffles. The favors seemed to be a hit (thank you to another awesome friend for that fun idea)! I made each guest a set of 5 note cards with lined envelopes. (You can find similar ones for sale on my Etsy Shop!!)

And one more pic just because this hat was my favorite purchase of the night!

I never anticipated that so many people would come out to support me like they did last night. Family traveled over 2 hours to be there, friends made arrangements for people to watch their kids and all 50 people made room in their schedules to come celebrate. One of my very good friends and my sister-in-law both spent much of their evening taking the awesome pictures above!! My husband has been more supportive than I could have ever asked. He’s entertained the kids after work most days so I could work on pulling all of this together, and after putting them to bed he’s been helping me in every way possible! I truly appreciate it all!!!! The night was an absolute success thanks to so many of you reading this, so THANK YOU!